My work as a videoartist is based on my search for finding ways to increase Empathy, may it be referred to human beings or towards different phenomenas of nature.

A relaxing and „therapeutic“ Video, shot at the Italian Coast (Nervi, Portofino) with the intention to calm down in times of too much tension.
In difficult times in we cannot reach a spot in nature to relax, I want to share these views of the beautiful seaside hoping to contribute a little consolation and support for keeping our minds balanced.
While identifying with the protagonist of the video, it is more easy for the viewer also to „feel“ and absorb the portrayed nature with all senses.
By observing certain body movements even in a video, our brain receives neurological impulses as if we ourselves would have been performing in the same way, and so it sends some releasing and relaxing impulses towards our nervous system.

INSOMNIA, MOZART LULLABY FOR ME AND MY CAT

A therapeutic video, again. It’s said that the images of cats as well as classical music have a potential to calm us down a bit. And here we go… My cat loves Mozart. I love my cat, Mozart, my Garden and Gymnastics. Like everyone in Italy right now, I’m in Quarantine in my house. I can’t sleep, there’s no sport possible to release my tension. Feeling my nervousness, even the cat can’t sleep. I’m going to the garden (I’m lucky, very lucky) to do some physical activity.
Unfortunately, I’m not as quiet as I thought, the neighbors woke up already, I’m sorry.
I’m going back in the house. I play Mozart, a bit. That always calms me down. Excuse me, Amadeus, to use you as a lullaby. You’re too good. But this is an emergency.

And while I am moving , I try to observe, like an animal . . . observe the whole situation, calmly, patiently, without too many emotions, just observe . . . so does my cat. At least it seems that way.

A challenge: Keeping an open mind
Even if everything is closed
Shops, Beaches, Exhibitions, whole countries
Also my body.

I look at the old turtle in my neighbor’s garden and try to learn from her that slowness (which I hate) doesn’t have to be a bad thing.

The performance on the cliff I was doing in March, it was exactly the last day in which going to the beach was still allowed. I was insecure about including these shots, then I decided yes, they can also give a bit of hope by nurturing the desire for life as well as for a kind of rebirth. Happy Easter!

This Video is inspired by Expressionist Dance, Chi Gong and meditative exercises in which you imagine communication between inner parts of yourself, for example you visualize your inner wounded child which interacts with your “adult” and mature state of mind to feel yourself secure and protected.
This practice is a fundamental element in trauma therapy: You calm yourself by using your imagination to invent a constructive communication between different psychological states within yourself.
The contemplation helps to increase mental balance even if you are in difficult situations.

„Take a breathe“ is, like “Sono qua / I am here”, is inspired by the contemplative exercise „My Safe Place“, which is a fundamental element in trauma therapy: You calm yourself using your imagination to invent your „safe place” in your imagination to which you can always return despite finding yourself in difficult situations. This contemplation helps to increase mental balance.
To create this video I filmed some intuitive and spontaneous performances in the Ligurian landscape, always based on my Chi Gong practice that supports the use of conscious breathing together with physical and meditative exercises deriving from ancient Chinese culture.

I’M SPEAKING TO THE SEA

LYRICS:
I TALK TO THE SEA

But why can love you
And hurt you
At the same time
why?

My two-minute video-Loop „Parlo con il mare” is inspired by the painting „La Sposa del Mare/ La Innamorata del Mare” by Pompeio Mariani, on display at the Modern Art Gallery of Genova Nervi. The oil painting of 1897 shows a woman in wedding dress lying on a rock, immersed in the romantic view of the sea, which according to the title is her „bridegroom”.

The semi poetic text of my video oscillates between passages that could be addressed to a human partner and passages that evoke a deeply felt emotional bond with the Mediterranean sea itself: So deep that the feeling of a more personal responsibility for the biosphere becomes evident. The latter, however, not out of guilt that risks manifesting or strengthening collective depressive tendencies, but on the basis of an attitude of strong attachment inherent in many mystical traditions, whether those of indigenous cultures or Buddhist philosophies:

A love that is not content with admiration or ecstasy, but that faces the mutual bond and the responsibility that comes with it without fear. What interests me about this topic is not at all mystical immersion as an alternative to interpersonal bonds, but the emphasis on a strong relationship with natural phenomena, based on love and a sense of responsibility. A „neo-romantic”; approach in times of threat generally present in the biosphere, with this very intention:
Let the sense of responsibility for our environment and nature be based less on guilt and rampant fear of the future and more on positive emotions such as empathy and affection.

The video combines filmed paintings, inspired by the observation of the sea in Nervi, Liguria, with film footage of the sea along this same coast. The watercolour paintings used in this video are based on meditative processes in silent dialogue with the sea, always created outdoors directly on the rocky coast. I see the process of painting as a „treasure hunt”, a „deep dive” into contemplative and mystical states. I produce paintings that connect the flow of subjectively felt energies, both emotional and physical, with my perception of the dynamic force of the sea.

A meditative reflection about new beginnings in interim phases in life. After moving from Berlin to the Ligurian Sea, I noticed how the daily observation of the sea was constantly challenging my notion of time: I started to appreciate more the rhythms of slowness and the dynamics of pauses which seem to have a quality of stagnation on the first view.
But can’t exist a lot of movement in periods of apparent stillness, while being in unhurried interim periods of transition?

BIRDS AND RESILIENCY
Video – Installation, Loop, 14 minutes, Berlin-Genoa, 2017/18
Language: English, exhibited with Italian Translation attached
My father, born 1934 in Berlin in a Prussian family, is telling to me his memories of war and refuge in Eastern Prussia which I am quoting in this video:

Selected Memories of my father’s childhood since 1939 in Berlin, Koenigsberg (Kaliningrad) and Ostseebad Rauschen (Svetlogorsk ll) and his refuge from Frombork (Poland) 12 km across the frozen Baltic Sea to Frisches Haff and then via Gdansk /Hela to Denmark in April 1945.

This video is not a historical documentation, indeed I am emphasizing mental states of hope and calming: “Resiliency” means the capacity of the human soul to overcome traumatic experiences by establishing a positive power within. I am combining these personal texts, seen from a child’s perspective, with abstract / surreal performance scenes set in nature and referring to birds.
The ability of Resiliency seems to me a very important one in times of migration, war, refuge or natural disasters.
My fathers source of Resiliency is rooted in his empathic affection for nature, especially for birds, whereas in many cases the process of creating art itself is appearing as a supportive resource.

ERINNERUNGSRAEUME/ SPACES OF MEMORY – Performing Letters to the Other World

While performing in the projection of slides which my father had been taking 60 years ago from my mother, I am establishing a kind of meditation about a timeless dimension. ”My performances are presents for you  meanwhile you are present for me. A Kaleidoscope of your life in the past  is becoming now a visual dialogue between us. Thank you for your presence.  Now: a performance, a portal, a portrait”

Surreal diary-like drawings, filmed in a suggestive way: Moments of the Ups and Downs in human relationships, the crisis as a new beginning. 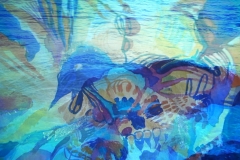 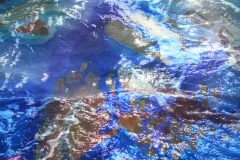 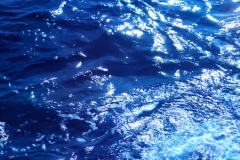 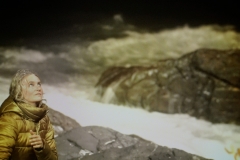 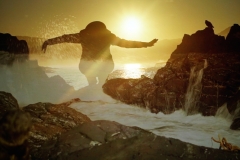 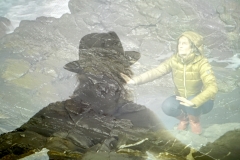 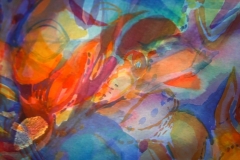 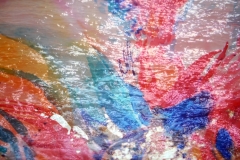 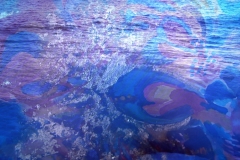 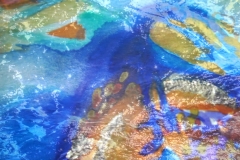 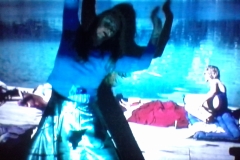 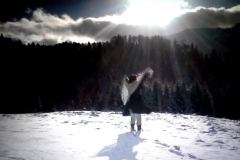 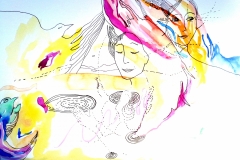 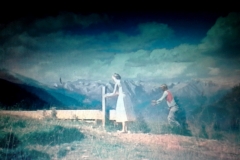 A large part of my videos are recordings of my improvised live performances in nature, in fact there is a dialogue between my body and the camera: The recording helps to increase concentration during the performance process. The performance instead gives the video a certain “weight of physical experience”, in which my body works as a medium to increase my awareness.

I accentuate empathy or even love as an approach to the forces of nature that is not denying the horror of natural disasters and concern about climate change, but focussing on the joy of connection and of being part of the universe.
My artistic work is influenced by the works of the Californian philosopher Donna Haraway and the Berlin Biologist/Philosopher Andreas Weber. Both postulate a dialogical and empathic relationship with natural phenomena: As a possible way to generate capacity to act in the face of climate change.

My two-minute video-Loop „Parlo con il mare/ I speak to the Sea” is inspired by the painting „La Sposa del Mare/ La Innamorata del Mare” by Pompeio Mariani, on display at the Modern Art Gallery of Genova Nervi. The semi poetic text of my video oscillates between passages that could be addressed to a human partner and passages that evoke a deeply felt emotional bond with the Mediterranean sea itself: So deep that the feeling of a more personal responsibility for the biosphere becomes evident.

I filmed my intuitive performances in the Ligurian landscape for the creation of the Videos “Respirami/ Take a breathe“, “Sono qua/ I am here”, and “Tension, Release”. These works are inspired by the meditative exercise „my safe place”, a contemplation that derives from trauma therapies.

„The Airy Ocean“ is a meditative reflection about new beginnings, times of transition and slowness, consisting of filmed paintings and Clarinet Improvisation.

During my project ”Birds and Resiliency” I tried to understand better the experiences my father had made as a child being a refugee during world war ll.

”Erinnerungsraeume/ Spaces of Memory” is a series of videos based on performances I created after the death of my mother, searching to find relations with unknown aspects of her life as well as maintaining whatever sort of contact towards another dimension.

„Ambivalent“ is consisting of surreal diary-like drawings, filmed in a suggestive way: Moments of the Ups and Downs in human relationships, the crisis as a new beginning.